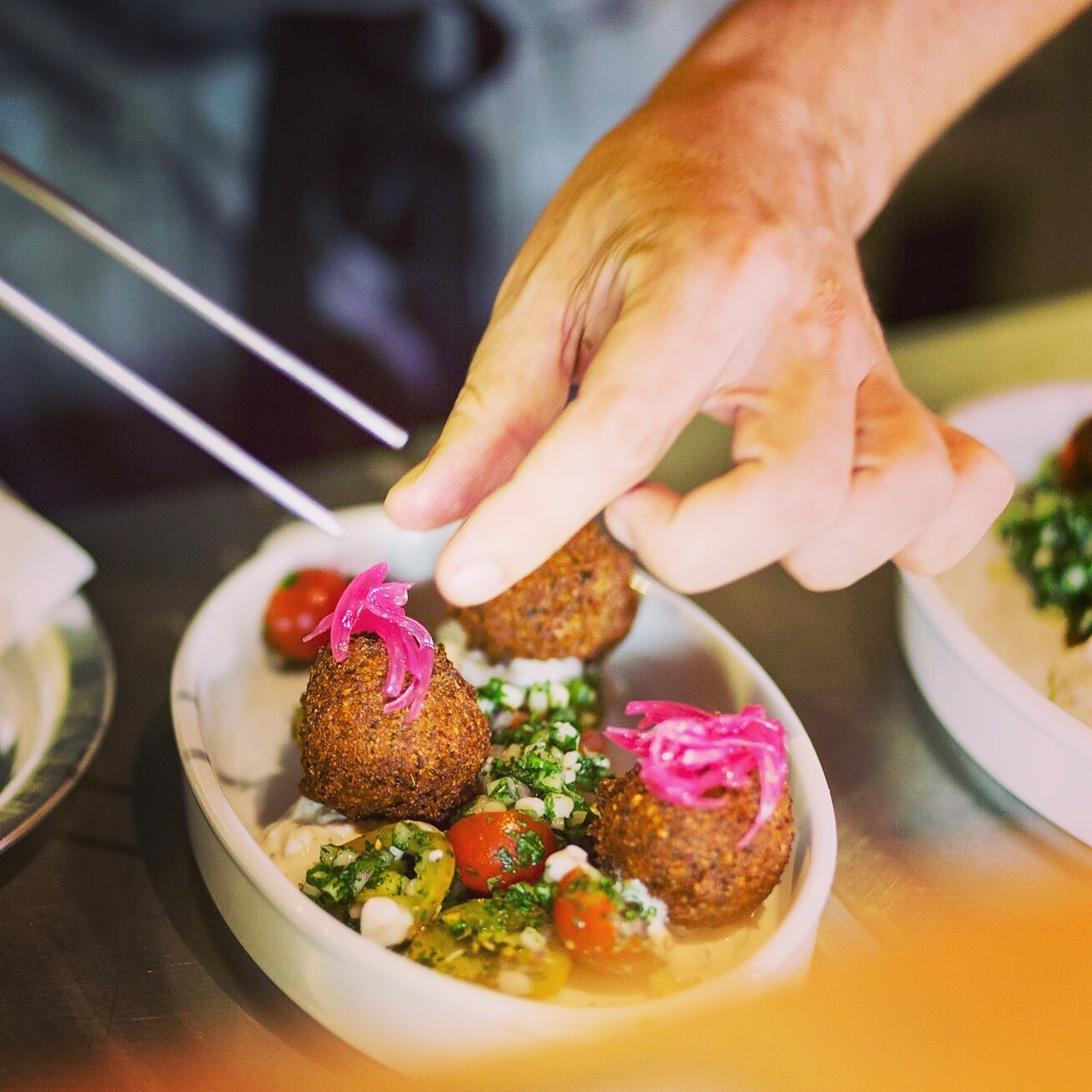 A Brief History Of The Famed Falafel

The origins of the falafel recipe are a bit murky and controversial, likely stemming from political, religious, and cultural tensions that claim to be the genesis of the falafel recipe. With Egypt, Palestine and Israel all declaring falafel as a national dish, it seems as contentious as the regions themselves.

Despite disagreements, Egypt seems to be the most likely beginning of this humble street food, though exactly when is still up for debate. Many Egyptians state roots from around 1000 years ago, but there seems to be no evidence to support that in Pharaonic scribes. Considered a food of the people, the oil necessary to fry falafel during this time period would have been much too expensive for commoners. Another theory suggests the Coptic Christians were seeking an alternative to meat during Lent and other fasting holidays. Yet again, there is no evidence to back up these statements, and seems very likely false.

After the British occupation of Egypt in 1882, literature begins to record falafel recipes and references during the period. It’s speculated that officers of the British army grew accustomed to the flavors of Indian fried croquettes during their occupation of the country, and later suggesting a local version to the Egyptian cooks utilizing fava beans, which were grown in large quantities in the region. The origin of the name, fūl, means bean in Arabic, and thus falafel was born.

The Spread of The Humble Falafel Recipe

As the popularity of falafel grew throughout Egypt, it migrated from Alexandria, the largest port city throughout the Mediterranean Sea and the Middle East. Large shipping trade routes proliferated the simple fried delicacy. Traveling to Lebanon, Turkey, and Yemen eventually, the falafel recipe was modified with chickpeas and local agriculture, representing each culture uniquely, though the base falafel recipe was mostly unchanged as it found new homes along the Mediterranean.

As falafel infiltrated the Jewish communities of Palestine, there wasn’t such a contentious debate about who owned the rights to the dish. Ingredients were readily available, and it was a convenient and budget-friendly snack for all to enjoy. Following the Arab-Israeli War in 1948, the falafel was recognized as the national dish of Israel in 1960, much to the dismay of their Palestinian neighbors.

Despite the discourse in the origins of falafel, food is something that historically has brought humans together for centuries. If only we would stop looking at what makes our cultures differ, and instead focus on coming together and sharing the things we have in common like the love of falafel.

Cultural Cultivation Of A Chickpea

Chickpeas were one of early man’s first domesticated crops over 7,500 years ago, and predating pottery production. They began showing up in ancient literature around 800 AD in France with Charles the 1st describing how and where they were being grown in his kingdom. During periods of war, drought, or rationing, chickpeas were roasted, ground, and used as a coffee substitute.

Cultures including Spain, Africa, and the Philippines have used chickpeas throughout their cuisines, and as a viable source of protein for generations. One of my personal favorites is Cigrons amb espinacs, a beautifully balanced dish hailing from Catalan. It consists of smoked bacon and aromatics, with chickpeas, wilted spinach, raisins, and toasted pine nuts. In Northern Africa, they are utilizing garbanzos in a thick tomato-based stew called leblebi. The birthplace of lebleli is Tunisia, and is typically eaten for breakfast. This warm savory stew has many variations and regional garnishes. It consists of braised chickpeas, aromatics, toasted cumin, paprika, and stewed tomatoes swirled with harissa.

The Growth of India

With a lengthy history of adopting chickpeas throughout their food, India is the largest cultivator in the world, boasting almost 70% of global production. From curries and stews to chickpea flour (Gram flour), India relies heavily on this versatile legume. Mirchi vada is a stuffed pepper fritter with savory spiced potato, cauliflower dusted in chickpea flour and deep-fried. It’s a hugely popular street food created in Rajasthan, typically served with a spicy tomato sauce and tamarind chutney. A sweet Indian pudding known as chana daal halwa, comprised of roasted Gram flour, ghee, sugar, raisins, and cardamom, the mixture is cooked down with water into a sweet pudding and topped with almonds.

The genetic diversity of garbanzos is an issue that seems to worry agricultural scientists. When domesticated chickpeas were bred to stay inside the plant for the purpose of protection from pathogens, we narrowed the genome and diversity of the plant. Mono-cropping has potential risks to our food supplies, and possible ramifications we can’t yet imagine. Today, researchers and scientists are trying to understand the genome sequence and crossbreed with wild varietals to improve the diversity of the humble chickpea.

Read our article on the Agricultural Revolution and how it has shaped the culinary landscape dating back thousands of years. 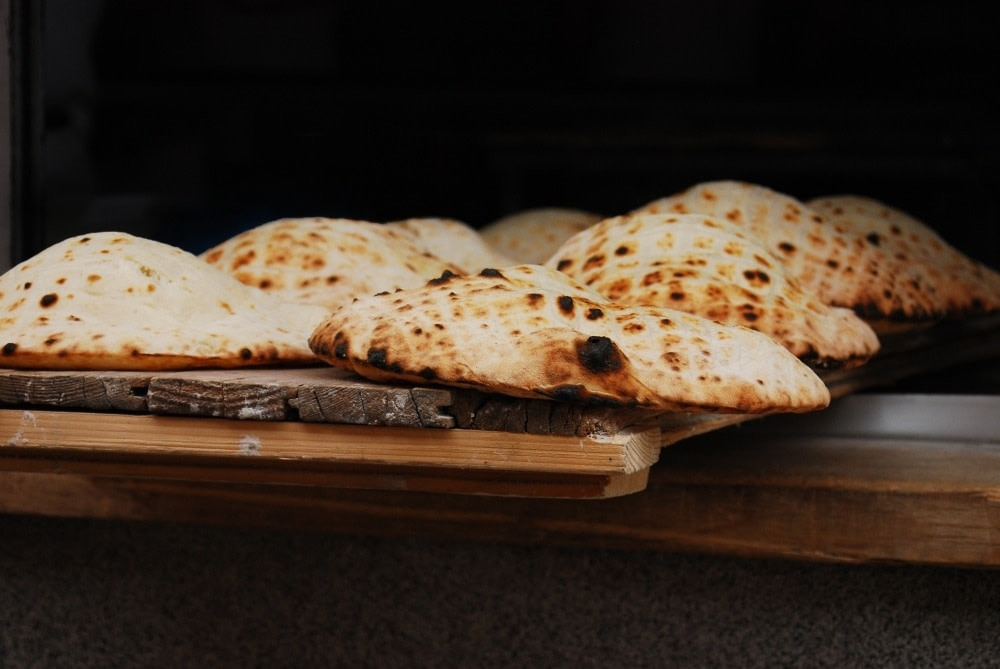 The Pita: A Staple Of The Mediterranean Diet

A leavened yeast dough, the pita has acted as a meal and a utensil for thousands of years. There is evidence dating the pita back to the stone age, but it was most likely different from what we use now. Ancient wild wheat and barley was cultivated, ground to flour and mixed to form the rustic flatbreads, then cooked in a tandoor oven. Most likely ancient breads didn’t have the same pocket that we see in today’s pita bread.

The modern pita is baked in a high-temperature clay oven, which creates steam in the dough and the formation of a pocket within the dough. When cooled down the pocket remains and is perfect for your favorite hummus, Baba ganoush, or crispy falafel.

In Turkish cuisine “pide” refers to three different types of flatbreads, the traditional pitas we see in all grocery stores, a dough topped with cheese and meats similar to pizza, and Ramazan pide a round bread often with a weaved crust and sprinkled with sesame seeds. While in Greece pita generally refers to “pastries” like spanakopita and Karydopita or the Greek version of Baklava includes, walnut, clove, and orange, topped with a sweet syrup.

Like falafel, hummus is said to have originated in ancient Egypt, showing up in text and cookbooks during the 13th century. The Greeks and the Arabs have disputed the origins trying to claim their stake on a piece of culinary history. Palestinians and Jordanians serve hummus warm with bread typically for breakfast. A related Jordanian version of hummus is aban ma’ hummus, which translates to yogurt with chickpeas, they utilize yogurt instead of tahini and butter in place of olive oil. 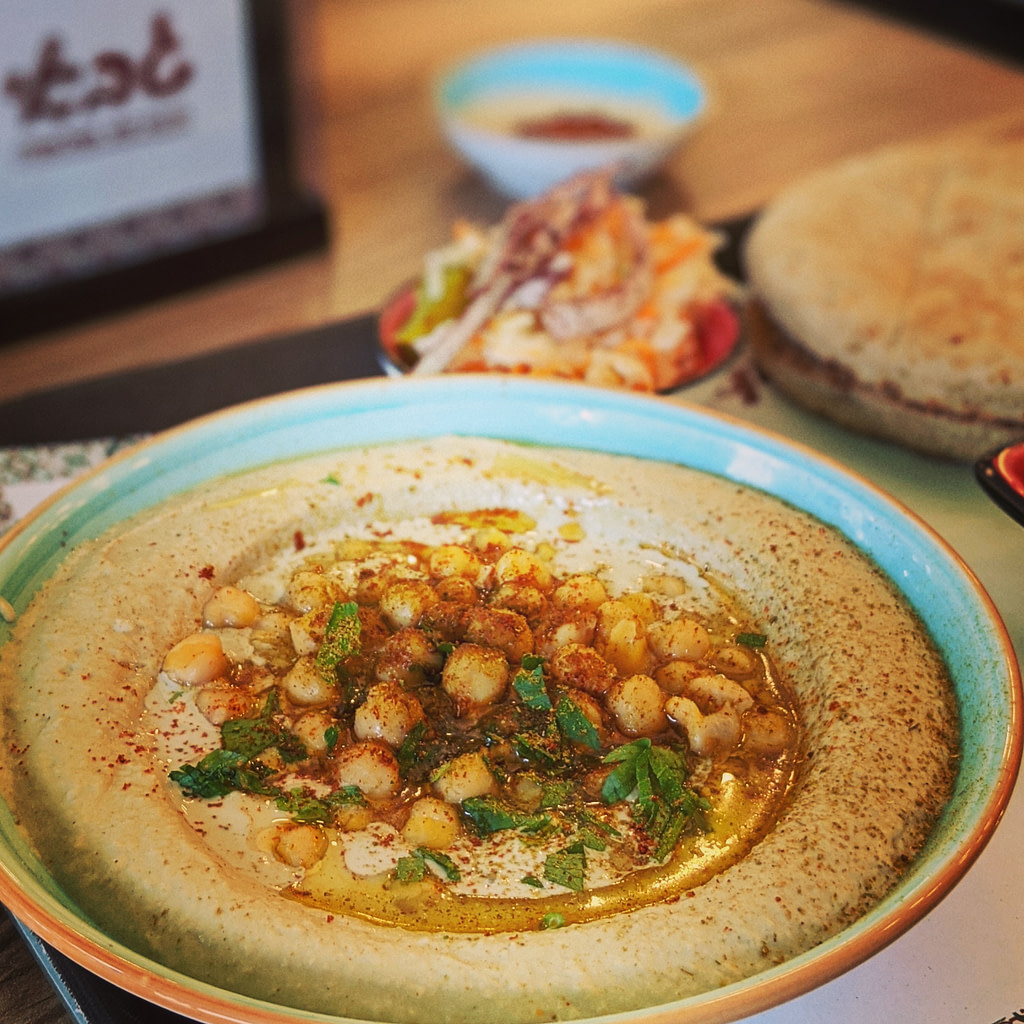 A Base Hummus Recipe

There are so many ways to prepare hummus with endless variations. Below is a base hummus recipe, I like to add cooked beets or roasted peppers to my hummus on occasion for a beautiful bright color. What’s your favorite addition to hummus? Let us know in the comments below.

This is a great falafel recipe I developed for a Mediterranean restaurant in Thailand. The falafel ingredients should be fairly easy to find. I like to buy dried chickpeas from the bulk aisle, all the herbs, onion, and garlic should be roughly chopped before adding to the food processor. It’s best to process the onion first and squeeze out all the excess water from it using cheesecloth or a strainer. Let us know how your falafel turned out!

Tags: The Best Falafel Recipe, The History of Falafel, Where Does Falafel Come From

Crab Cakes With A Mediterranean Twist